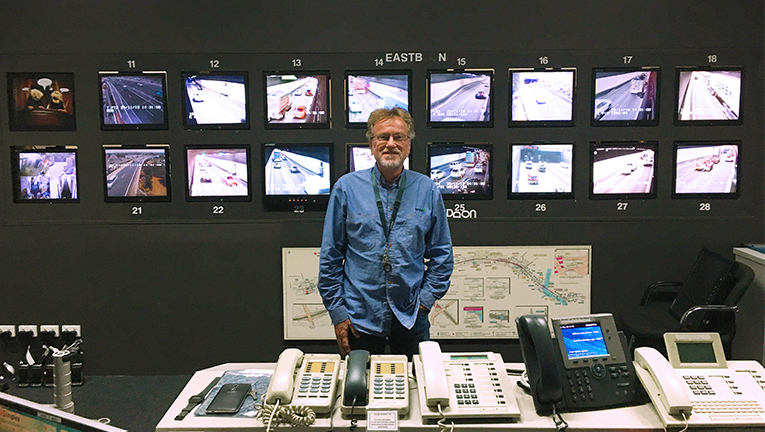 The end of the night shift on 28 November in the Motorway Control Centre on the M5East transport contract in south west Sydney will mark the end of a 19-year career for Motorway Controller, Phil Aley.

Phil joined the team when the motorway opened in 2001, working as Traffic Control Room Operator (TCRO) on the first shift, and has been guiding Sydney motorists ever since.

There have been many changes to the motorway environment over the last 19 years, not least in the volume of traffic.

One thing that hasn’t changed are the key skills Phil believes make a good motorway controller. This includes the ability to stay alert, especially during the 12-hour shifts that are standard in this industry.

Controllers must make sure the processes and procedures for dealing with different incidents are understood to react appropriately in moments of high stress.

“You can be sitting there for hours with nothing happening,” Phil says. “Then there’s a sudden incident, and you have to react quickly and calmly to pull all the pieces of the response together.”

Attention to detail is another advantageous skill in this line of work, as well as being a good team player.

Operations Supervisor Anthony Platt has worked with Phil for the past couple of years, and he says that Phil's attention to detail has been invaluable.

“His willingness to put in extra effort to help us meet operational requirements has demonstrated a commitment that I have come to depend on,” Anthony says. “Phil is straightforward, reliable and one of the most diligent people I have met.”

Phil says he’s looking forward to not having to set his alarm for 3.30am ever again, and to spending time at the beach near his new home in Kiama.

We thank Phil for his dedication over many years, and for his valuable contributions to the team at M5East – and wish him all the best in his retirement.