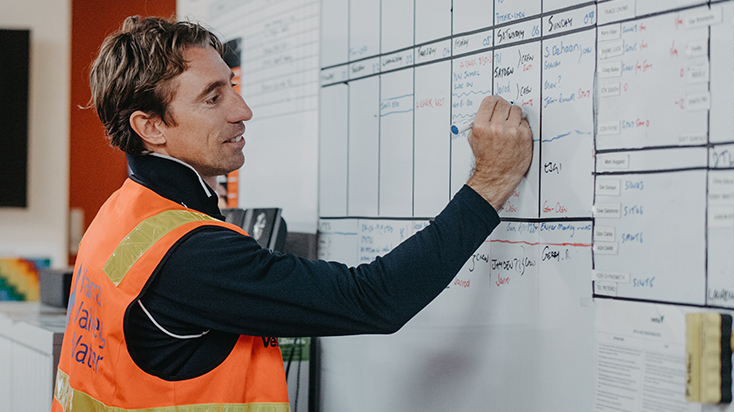 Fortunately, the incident occurred in the early hours of the morning, and well-developed processes and procedures were swiftly and smoothly implemented, reducing the impact to customers and resolving the issue in a timely manner. By the time most people were waking up, there was little to suggest the hive of activity that allowed them to take their morning shower.

Classified as an ‘exceptional event’ due to the potentially high and large-scale customer impact, the 24/7 Ventia Yarra Valley Water Civil Maintenance team swung into action under the steady leadership of Ventia Delivery Team Leader, Chris Gionis, and in partnership with Yarra Valley Water’s incident team.

Chris not only coordinated the emergency work by the crews, he was in constant communication with our after-hours national operations centre (NOC) team and collaborating closely with Yarra Valley Water’s incident team to minimise impact to customers and expedite resolution.

The impacted hospitals and other key customers, including nursing homes, were phoned by Ventia’s NOC immediately to inform them of the situation, and supplied with alternative water supply sources. Yarra Valley Water ensured consistent communications for customers via its online outage map, phone interactive voice response, social media and key messages for call taking staff.

Our experienced team - Dion Clarke, Shane Eldridge, Dan Biss - worked methodically through the night and in wet conditions, to ensure minimal impact to customers and succeeded in delivering the work within the service levels stipulated in Yarra Valley Water’s customer charter.

The rectification effort performed by the Ventia and YVW teams was praised by members of Yarra Valley Water’s executive team, including the Managing Director.

Ventia has been the sole Maintenance Service Provider for Yarra Valley Water since 2015. The largest contract of its kind in Victoria, it covers mechanical and electrical maintenance across Yarra Valley Water’s entire network, including after-hours.

Yarra Valley Water is the largest retail water company in Melbourne, providing essential water and sanitation services to more than 1.7 million people and 52,000 business customers in the northern and eastern suburbs.