The future of engineering at Ventia 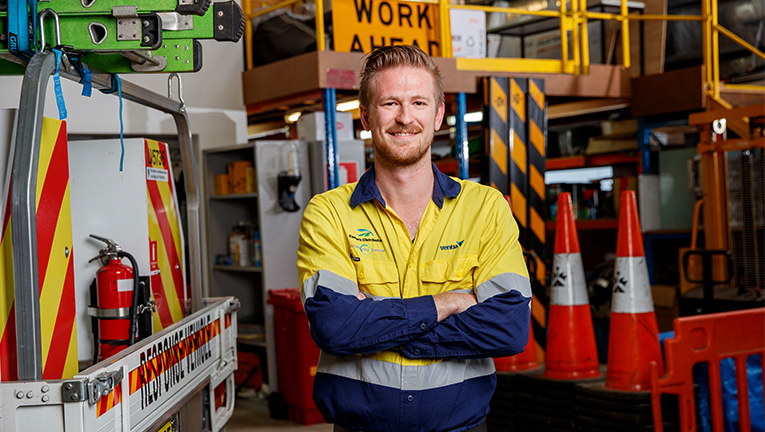 Luke Johnson started his career with Ventia as an undergraduate engineer, completing his civil engineering degree at the University of Sydney while getting on-the-job experience on our Eastern Distributor transport contract.

Five years later, Luke is now a project engineer working across the Eastern Distributor and Cross City Tunnel contracts, as well as on the Lane Cove Tunnel/M2 contract. These contracts cover key roads and tunnels in Sydney’s motorway network.

Working together as part of a motivated team is what Luke enjoys most about his current role, saying that even when things are stressful they pull together well to get the job done.

That job could be anything from regular maintenance of one of the four tunnels Ventia manages, to major projects like service pit replacements, or the replacement of major fire systems throughout the 20-year-old Eastern Distributor ‘double-deck’ tunnel.

According to Luke, one of the keys to his success has been his mentor, Mohsin Muhammad. Having a mentor has provided Luke with not only technical support but also help navigating the corporate world, and he says it is the best way to develop your skills at a large organisation like Ventia.

“I was lucky to have Mohsin – who is now a senior project manager – as my mentor when I started out,” Luke says.

“Although we’ve both changed roles over time, Mohsin is my manager again now and he certainly helped me develop into the engineer I am today.”

Luke says he has a passion for infrastructure, like the roads and tunnels he works on every day, despite his friends thinking he was going to end up as a mechanical engineer.

“My hobbies involve cars and other vehicles, I really enjoy go-karting, motor racing and being track-side,” Luke says. “But instead of building the cars themselves, I help maintain the roads they drive on!”

Luke attended the 2019 Roads Australia Summit in Sydney along with our CEO Mike Metcalfe and several other young engineers from across Ventia,

He says it was a great opportunity for this group of young engineers to hear experts talk about where they see the industry going and the challenges we’ll face in infrastructure in the future.

“There were several great speakers,” Luke said. “But for me one of the highlights was hearing about the importance of diversity and collaboration in our industry and in particular, about the need for industry, government and academia to better collaborate on solutions for the future.”

Ultimately, Luke’s goal is to manage big infrastructure projects to, as he says, “help keep Sydney moving forward and deal with the challenge of a growing population.”

Big goals for a young engineer, and we look forward to supporting him as he reaches for them!