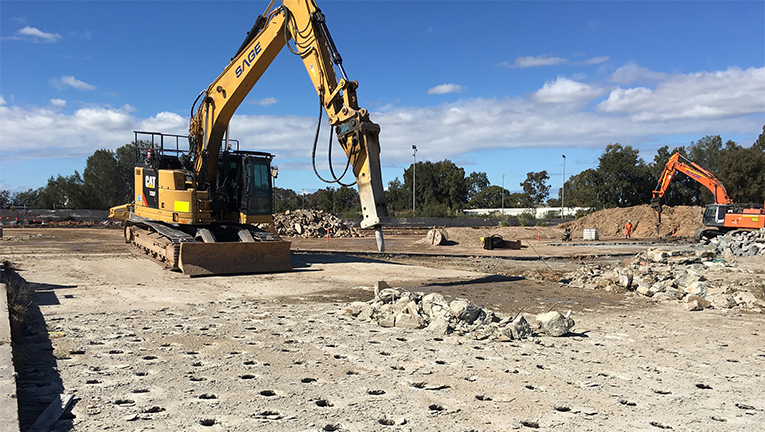 Testament to Ventia’s capability in remediation works is the recent awarding of Phase 2 of a key project for Transport for NSW (TfNSW).

Having successfully completed Phase 1 of the Early Works at the site of the future stabling and maintenance facility for the Parramatta Light Rail project, Ventia has now been awarded Phase 2.

Located near Parramatta in Sydney’s West, the 6.2 hectare site on Camellia peninsula was historically used for chemical manufacturing which had caused residual contamination of both soil and groundwater.

The Phase 1 ’Early Works’ entailed the construction of a hydraulic barrier wall around the perimeter of the site’s boundary to prevent groundwater migration, and replacement of the existing groundwater treatment plant.

With this work complete, our Environmental Services team is now focussing on Phase 2 of the project - the construction of an engineered containment and capping system, including ground improvements to facilitate the construction of the future maintenance facility.

The scope of the project includes demolition of existing slabs, complex ground improvement engineering including the installation of approximately 4,000 drilled displaced columns (DDC), and a series of complex capping profiles made up of various materials including vent work and liner systems.

The DDCs are subterranean concrete columns drilled to a depth of 12-15 metres and arranged in a grid pattern. The DDCs provide the necessary ground stability to bear the weight of the future stabling and maintenance infrastructure, including the light rail vehicles.

A sustainable aspect of the project is the use of Sydney sandstone, excavated from tunnelling works at other major Sydney project sites, such as Sydney Metro and Westconnex. The excavated soil will be used to cap the site and potentially redirects approximately 134,000t tonnes of soil from landfill.

Ventia’s capability and understanding of remediation technologies, backed by over 30 years’ experience and more than 140 successfully completed large scale environmental projects underpins our approach at Camellia, inspiring confidence for the successful delivery of Phase 2.

Phase 2 works have begun and are scheduled for completion in early 2020.