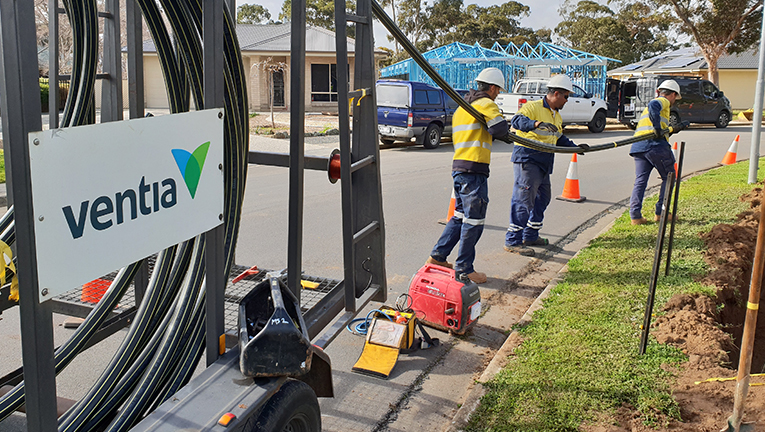 Ventia’s Gas business is building its reputation with key clients in Victoria and South Australia through the successful delivery of gas mains and services and gas renewal projects. This has led to the recent award of three new contracts by APA Group (APA) and Multinet Gas.

Based on Ventia’s consistent, quality and safe delivery of services, APA has awarded Ventia a new five-year Mains and Services contract, commenced on 1 January 2020. APA is responsible for the provision of gas to South Australian homes and businesses.

Operating from Ventia’s facility in the Adelaide suburb of Wingfield,
our team has been delivering a gas Mains and Services contract since January 2018.

This team has also been providing gas main replacement services for APA since late 2017. APA has extended the existing panel arrangement for this work for a further two years to December 2021.

Since late 2017, Ventia has replaced approximately 130 kilometres of gas mains in Adelaide’s northern suburbs and CBD. Once a new network main is constructed, the team is then responsible for transferring, and often renewing, all gas services to domestic and business customers.

“I am proud to say that throughout our contract with APA to date, the Ventia team has honed their skills and expertise, in partnership with our strong subcontractor base, to be one of the leading gas mains replacement specialists in SA,” Clive says

In 2020, the Ventia team in Adelaide will deliver in excess of 40 kilometres of mains replacement in Adelaide’s north for APA.

In Melbourne, our Gas business has succeeded in winning numerous new gas mains replacement projects for client Multinet Gas – amounting to approximately 30 kilometres - to deliver in 2020. This number will add to the 120 kilometres already delivered for Multinet Gas over the past two years.

The gas main replacement projects for both APA and Multinet Gas form part of a national gas infrastructure replacement scheme. Gas networks across Australia have a high proportion of ageing infrastructure assets that are at their end of life.

Works involve the replacement of old cast iron and ageing PVC and PE infrastructure networks with a new high-density polyethylene (HDPE) network, using either traditional open cut construction or, in many instances, the new HDPE pipeline is inserted within the existing gas network infrastructure.